To 2019 and beyond: forecasted Bulker, Tanker, Container and LPG values

VesselsValue has partnered with Oslo based shipping consultancy firm ViaMar to provide Future Market values for each individual vessel in the Tanker, Bulker, Container and LPG fleet. Future Market Values are quarterly predictions for individual vessels provided until the end of their predicted economic life.

The fourth quarter of 2018 returned tighter markets across the tanker segments. Asia’s demand for oil continued at a strong pace through a combination of consumer demand, strategic storage requirements and planned start up of new refineries. Again, China emerged as the greatest driver for demand. Continuously evolving trading patterns caused by OPEC+ production cuts and Iran sanctions, as well as the ongoing decline in Venezuelan production and exports, have further boosted crude and product flows out of the U.S. Gulf. The ton mile intensive trade from the US to Asia, combined with typical winter seasonality, culminated in strong spot markets. 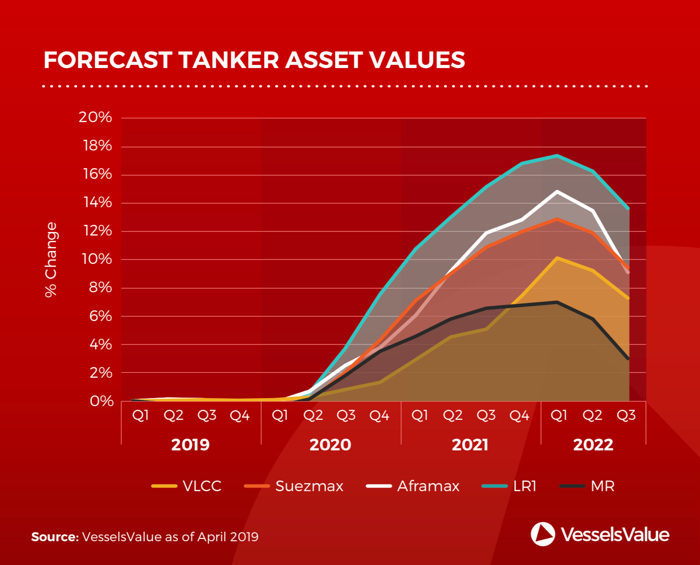 Values strengthened during the fourth quarter and into the first quarter this year, though product tanker vessels have lagged behind the larger crude carriers. An asset value upside is still present during our projection period for both newbuild and second hand tanker vessels

On the supply side, scrapping activity has come down from its second quarter 2018 high, but we still recorded the busiest fourth quarter since 2013. Ordering activity came down in the fourth quarter at 3 MDWT compared to 7 MDWT in the third. Implementation of IMO 2020 is expected, through reduced speed and inefficiencies, to shave off supply capacity going forward.

After a firm fourth quarter of 2018, earnings for the VLGCs declined in 1Q 2019. Cold weather in the US contributed to higher domestic consumption and inventory levels, resulting in reduced export volumes.

We expect earnings for VLGCs to improve over the next few years, as LPG trade demand is likely to outpace fleet growth. Growth in U.S. exports of LPG, ethylene and propylene is expected to be a main contributor to the growth in trade, unless hindered by geopolitical tensions.

The outlook for continued improved earnings is likely to moderately stimulate values for the small sized vessels of pressurised and semi refrigerated types. The MGCs are expected to see a firm appreciation in asset values, after a prolonged period of decline from 2015-2018. The improved earnings for VLGCs will also be reflected by a moderate appreciation in values for these ships.

It has been a tumultuous six months in the dry bulk sector, with China imposing quotas limiting coal imports during November and December 2018, the U.S. China trade war providing uncertainty in the markets as well as the catastrophe of Vale’s dam collapse on the 25th January 2019, causing hundreds of civilian casualties. These iron ore and coal developments have put downward pressure on dry bulk freight rates after a seasonal soft fourth quarter.

Capesize freight rates have tumbled and dragged freight rates for all dry bulk segments with it. However, during the past weeks, the other segments have recovered. Rates for Capesize vessels are still depressed.

In response, values marginally weakened during the fourth quarter and continued to slide during the first quarter this year. No second hand sales for Capesize vessels have been recorded since the19th December 2018, a market first.

On the supply side, scrapping has increased substantially with just over 3 million DWT removed from the water during the first quarter of 2019, and ordering has remained very low.

Container trade volumes on the main trade lanes, Asia to North America and Asia to Europe, have shown diverging trends this winter. The main reason for the stronger growth rates to North America has been the ongoing trade war, where shippers were fast forwarding goods ahead of expected U.S. tariff increases scheduled for March 1 2019. However, while negotiations are progressing, the U.S. administration has delayed additional tariffs.

Six to 12 month time charter rates reached a peak during the summer months last year before starting a long decline through the third and fourth quarters. Recently, the larger Post Panamax vessels have gained some ground but for the most part rates are currently hovering below rates of the first quarter last year.

Fourth quarter scrapping activity increased, and we expect removals of 50-60k TEU per quarter in 2019. That is an improvement from 2018, but not enough to make a considerable difference. More importantly, declining speed, as realised in the fourth quarter, will dampen supply growth in our projected period.

The second quarter of 2018 marked the recent peak in Container vessel values, which have since been in decline.